Home / MES Slideshow / Meet the Inventors of the Spork Tray!

Meet the Inventors of the Spork Tray!

In January the third grade AIG students participated in “Smart Tank”, an entrepreneurship challenge to create a product that would improve the lives of others.  Once their group idea was developed, they worked to create a business plan, sample prototype, and presentation that was presented in front of judges.  On January 31, each team pitched their creative ideas to local “sharks” for the Haywood County elementary competition held at Clyde Education Center.  There were two winning elementary teams tying with the exact same score. Meadowbrook’s “Spork Tray” was one of those teams and was awarded $100 to create a more detailed prototype of their “Spork Tray”.  Haywood County Schools Foundation awarded an additional $200 grant toward their project.

Their second round was the Western Regional Competition held in Sylva on March 2.  At that time, Meadowbrook’s team of two presented their product idea and prototypes to another panel of regional “sharks”.  This time they competed against six other teams of elementary students from Western Carolina districts.  They won again and were awarded an additional $400 of prize money to continue their entrepreneurial journey. They plan to use a portion of this money to create more “Spork Trays” (a reusable lunch tray with the spoon and fork attached to the tray so they won’t fall on the floor and get dirty) to be used in the school’s cafeteria, as well as make a monetary donation to Jump Rope for Heart Foundation.

On March 9 Meadowbrook’s “Spork Tray” team was invited to share their Smart Tank experience at the monthly Haywood County School Board meeting.  Eliana Jones was able to attend that night’s meeting, along with her principal and family members, and very confidently stood in front of the school board and superintendents to explain her team’s project and journey. 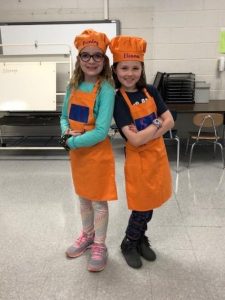 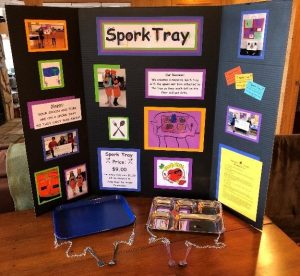 No events to display.